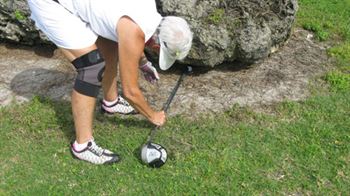 The Unplayable golf ball. Who gets to decide?

We played a round at Eastwood Golf Course yesterday. It’s one of the more challenging and fun public courses we’ve discovered in the Fort Myers’ area. With lots of water and woods winding and dividing the fairways, accuracy plays a big part in a successful round, and landing a ball in a spot that is unplayable is not hard to do as you can see from the picture above.

As in this case, it’s pretty easy to decide whether a ball is unplayable. You follow Rule-28 of the USGA, take your penalty and keep on playing.

But who gets to decide? and can you declare a ball unplayable no matter where it lands? Even if your golf partners think you should be able to hit it? Who decides?

The rule is pretty clear. The player alone makes the decision. The only spot on the course where a ball cannot be declared unplayable is in a water hazard. Otherwise, under a bush, in a tree, up against a rock… the player decides.

Rule -28 USGA.ORG
The player may deem his ball unplayable at any place on the course, except when the ball is in a water hazard. The player is the sole judge as to whether his ball is unplayable.

If the player deems his ball to be unplayable, he must, under penalty of one stroke:

While researching this rule I discovered dozens of conditions on the unplayable ball rule and some very strange circumstances that dictate how the rule should be enforced. Here is one of the strangest:

A.Under Rule 25-1b, the player may drop the ball, without penalty, within one club-length of the point on the ground directly above its position in the burrow. In such cases, vertical distance is disregarded in applying the Rules.

LOL – Sounds a little like a scenario from “Caddy Shack!”  If you are going to hit out of bounds, hope for a groundhog’s burrow that ends up back under the fairway!

Do you have a wild “out of bounds” story to share? Add it to the comment section below.

Golf Survey Results: What do women golfers want in 2021?