The world’s top pro female golfers will compete for $1.2 million in official prize money as the tournament begins the LPGA’s race to the 2019 CME Globe. 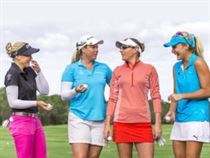 New for 2019, the Diamond Resorts Tournament of Champions Presented by Insurance Office of America is one of the most unique events on the LPGA Tour, bringing together some of the world’s top professional women golfers to play alongside a roster of world-class sports and entertainment celebrities.

As an official LPGA event, the tournament will open the 2019 season and feature one of the top LPGA fields in the world. Only winners from the past two LPGA seasons qualify to play, so competition will be tough and the stakes high with $1.2 million in official prize money on the line. The LPGA pros will play 72 holes of stroke play with no cut, and be joined on the course by 45 sports and entertainment celebrities competing for their own $500,000 purse. Ten amateur golfers, who qualify during the event’s pro-am, will also have the opportunity to play alongside the stars during official tournament rounds. The celebrities and amateurs will compete using a modified Stableford format that awards points for strokes.

The LPGA Tour hasn’t had a champion’s tournament in more than a decade, but the Diamond Resorts Tournament of Champions is bringing it back with an event unlike any other. All four days of official play will be nationally televised, with Thursday and Friday on Golf Channel and Saturday and Sunday on NBC. But nothing will beat catching the competition live at Tranquilo Golf Course at Four Seasons Golf and Sports Club Orlando from January 17-20, 2019. With private evening events and concerts, a world-class field of players, and unforgettable action, you won’t want to miss the inaugural event.