Every golfer dreams of making that magical Hole-In-One! I think about it every time I play the par3 17th hole at my home course. There’s a bench engraved with the name of one of our league who made an ace happen a few years ago. And a few months ago I witnessed one of my golf partners sink an ace on the par3 7th hole at our partner course. It still hasn’t happened for me, sigh. But that got me thinking – what are the odds of making a hole-in-one?

Guest author, Phil Blackwell tells the story of Patrick Wills, an American amateur golf who once scored three holes-in-one in a single round!  The infographic Phil created (pictured below) was produced on the back of a survey he did in the UK which showed that 79% of Brits underestimate their chances of getting a hole in one (women are more confident than men) – odds can actually be as low as 5,000/1. 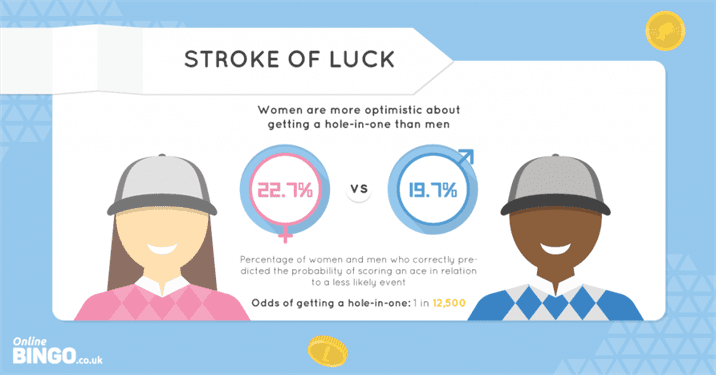 A stroke of luck? The truth about hole-in-one odds

The life of a golfer is scattered with moments of personal magic.

Your very first eagle; that perfect chip from the bunker; the undulating long-distance putt that clinched the game…

But, few events are more memorable than scoring a hole-in-one.

The odds of scoring an ace stand at 12,500/1 for an average golfer, but can be as low as just 2,500/1 for a professional. Only last year, amateur golfer, Patrick Wills, hit three in a single round. 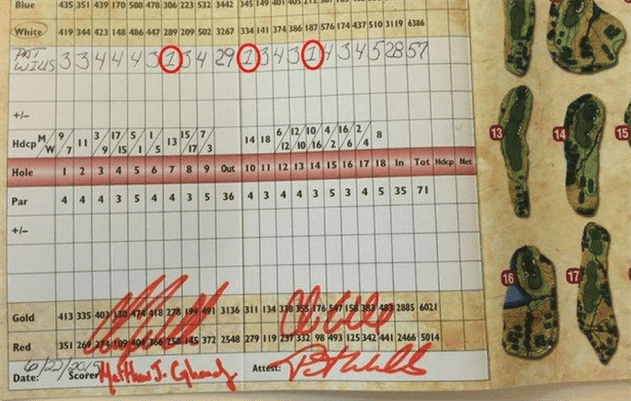 So is it any wonder that in a tournament field of around 150 players, playing four rounds each, the chances of a hole-in-one occurring are even better still.

With 600 rounds being played and the odds of each professional standing at just a fifth of an average player, there is actually a 24% chance of an ace being scored.

Perhaps not so unlikely after all.

In 1991, two British men, nicknamed ‘The Hole-in-one gang’ calculated the probability of a hole-in-one being scored during any professional golf tournament at the time as no more than even money.

By exploiting the miscalculations of bookmakers, the pair won over £500,000 and were refused another twelve payouts as a result of various legal disputes.

This classic example of misjudged probability highlights the general failure of humans to perceive luck and chance.

How to hit a hole-in-one

A recent survey by OnlineBingo.co.uk, revealed that 79% of Brits significantly underestimate their chances of hitting a hole-in-one by at least three times.

So what can you do to increase your own chances?

The odds of an ace

Even without taking action to shorten them, odds of 12,500/1 are actually quite low when compared to even more unlikely events.

Are you feeling confident? Somebody wins the Powerball every few months, right? And, news channels are always talking about plane crashes. A hole-in-one should be simple.

But, before you run off to the golf course, bear in mind the following from Professor David Hand, author of The Improbability Principle:

“If something is so improbable that it’s unlikely to happen during your lifetime, or during the history of the universe, then it’s only sensible to treat it as impossible. This is called Borel’s Law. Winning the lottery is an example.

“What people fail to allow for is the fact that, while the chance of any one particular person winning is very small, if enough people play then it becomes likely that someone will win.

Next time you step up to the tee on your favourite par three, don’t put pressure on yourself to ace the hole. Relax in the knowledge with for every drive, chip and putt, you’re moving one step closer to that elusive, yet achievable, goal: your first hole-in-one.

Share your best hole-in-one stories, near-misses and most expensive clubhouse rounds in the comments below.

5 comments for “The Odds Of Making A Hole-In-One”