I get a lot of emails from golfers who are sick and tired of playing a round of golf behind a group of new golfers who play as slow as “molasses running uphill in winter.”

Which begs the original question of this post: Should new golfers play by the rules?

Let’s get one thing clear. I am not against rules and I am not against new golfers. I was a new golfer once! and I know what it’s like to be the one searching in the tall grass for my golf ball on almost every hole. But I was lucky enough when I was learning to play the game of golf, to be playing with good players who were patient with me and told me when to pick up the ball and move on! While I was learning to play, I pretty much ignored the rules. My scores were terrible, but I always had fun and I learned a lot. Only after two or three years did I register with GHIN.com to begin building my golf handicap. 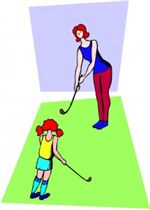 When you are first learning to play golf it’s more important that you enjoy the game than it is that you adhere strictly to a set of rules. Certainly, the rules are important but they are complicated, and they are meant to be followed by experienced players who are serious about submitting scores for handicap purposes. But most first year golfers are not going to be playing well enough to even think about building a handicap. They just want to get out there and swing the club, hit the ball straight and get into the hole without hitting fifteen strokes to do it. It just makes sense to forget the rules. If someone is playing golf just for the sheer fun of it, should I get all bent out of shape because they give themselves a free drop or kick the ball out of a hole so they have a better lie?

I was reading one golf pro’s idea on this subject at Linked In:

I have a 78 year old student who wanted to learn to play. I could never get him to hold the club properly. As a result he would hit a ground hook every time. So I put a training grip on one of his clubs and he started hitting the ball straight with nice carry. I replaced all his clubs with training grips. He is happy a s a clam and can’t get enough of the game. He absolutely loves it. Does he care that he is not playing by the rules? Not a wit. But he is out there almost daily hitting balls or playing.

Here’s another idea for nixing the rules: Many new golfers have a hard time hitting long straight drives. Should they be forced to play from the regulation tee boxes? On a par 5, 560 yard hole, a golfer who can barely hit 150 yards will need at least 4 strokes just to get near to the green, and that is if he or she doesn’t get into any trouble. Talk about discouraging. Wouldn’t it be smart to let that golfer drop a ball around the 300 yard mark, tee up and hit from there? Scott Seifferlein, head pro from Greater Grand Rapids, MI, who I’ve interviewed on golfgurls.com (click for podcast), has developed a program for beginning golfers… Playing From the Green, which encourages those who are new to the game to play from the fairway to the green, rather than from the tees to the green. This method, although it breaks all the rules, encourages confidence in his students and allows them some measure of success. And as they improve, they drop their ball a little further back from the green each time they play. Eventually, the plan is that they are actually playing from the regulation tees.

The beauty of following a program like this is that the game moves more quickly. Happy golfers hit and go. They don’t hold people up trying to figure out how the heck to hit out of a muddy ditch, or spend ten minutes trying to find that lost ball. Instead, drop a ball, kick a ball out of the rough, throw the ball up and out of the sand if you have to. Ignore the rules for the most part and move on. And for heaven’s sake, pick up after 10 strokes!

For some golfers, the question of playing by the rules is not even debatable. And I agree. If you are serious about the game, if you play in leagues and tournaments, and continue to work to lower your handicap, then the rules are a must. They create a fair playing field. Everyone plays fair and square.

But for the golfing newbie? I say ignore the rules for the most part. Just get out there and enjoy the game. Find yourself a small executive par 3 course and play your heart out. When you have finally fallen in love with the game, start playing with more experienced golfers, learn the rules and join the rest of us on the “big golf course.”

What do you think? Should new golfers play by the rules?

24 comments for “Should New Golfers Play By The Rules?”