The USGA just made this golf tool legal*** to use on the golf course! Honest!

Remember when you first learned to play golf, the pro told you you had to play the golf ball as it lies?

13-2. A player cannot improve: his lie by changing the ball’s position; the area of his stance or swing; his line of play; the area where he is taking a drop or placing his ball. These actions are prohibited: pressing the ground with a club; moving, bending or breaking a fixed or growing object (e.g., a tree branch); altering the ground’s surface; moving or pressing down soil or repaired divots; sweeping away dew or other moisture.

There are certain instances where the above actions are allowed without penalty: grounding the club lightly behind the ball; taking a stance in a normal manner; making a swing, provided the ball is hit; altering imperfections or removing moisture on the teeing ground; removing loose soil or repairing the putting green.

This past October 2014, this new invention was introduced and it’s been deemed legal to use. Decision 2014-299 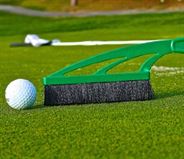 It’s a personal broom designed for easy use on the golf green. You use it clear your line of putt of loose debris, bugs, and pine needles, etc. Here in New England we have a lot of debris from those early spring buds and late fall leaves. Up until now it’s been a matter of leaning over and picking off the worst of the stuff. Now there’s a tool to help you brush away the bits and pieces nature throws at you.

I received a couple of samples of the WISP to try out. I used one and passed the other to one of my golf buddies. She immediately hung it on her golf bag and used it during our round (and it’s still there—several weeks later). The first time she pulled it out and started brushing off the line of putt, she got a few strange looks from other players. But when they were told it’s totally legal to use, they were tempted to borrow it themselves!

What’s really nice about the WISP is that it’s light and flexible and does not leave a mark. The brush is constructed so that it doesn’t allow you to press down on the green, which would be a violation of the rules. And it comes in handy especially when there’s a lot of sand blasted onto the green by bunker shots.

It’s a good tool to clip to your bag. The brush works well, but there is one big disadvantage: You have to remember to carry it onto the green! Of course, if you use a caddy when you play, he or she can carry it along to use when you need it. Very nice little feature.

If you are fussy about perfecting your putting you will love this tool. And it’s legal! What do you think? Would you sweep your line of putt to make a more perfect putting surface? Is it worth it to be that fussy? Add your comment in the space below.

You can purchase your own PocketWISP. Check out their website for more details.

*** One of our readers did a little more research on the legal angle of using the PocketWISP and received this response from the USGA:

The USGA has evaluated the PocketWISP and we did say it was conforming. However, the player should take caution in using the device to ensure that he or she does not breach Rule 1-2 (which prohibits a player from taking any action to influence the movement of the ball), Rule 13-2 (which prohibits a player from improving his line of putt), and/or Rule 16-1a (by exceeding the intent of the Rule requiring a player to exercise reasonable care in removing loose impediments, plus conflicting with the fundamental principle of playing the course as a player finds it).

3 comments for “You Won’t Believe It! The USGA Just Made This Golf Tool Legal!”