Three Putters To Play With

A attended a recent PGA show and had a chance to try out new equipment. It’s held 45 minutes out of Orlando at the Orange County National Golf Club (Q School for players trying to join the Tour). I headed for the putting greens and discovered a couple of new putters you should check out. 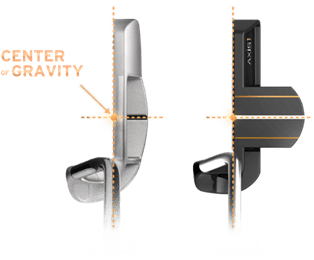 AXIS1 – Their tag line is “The putters that never turn on you.” Most putters have a tendency to “open up” during the stroke causing your putt to go off your target line. The AXIS1 is designed with the heel weight forward of the striking face, which puts the club’s center of gravity on the sweet spot. This eliminates the torque which causes the face of most putters to open up when you putt. It was named Best New Golf Product by golf.com and Best in Show by Sports Illustrated. There are two styles to choose from: the Axis1 Eagel, a classic blade putter and the Axis1 Umbra, a mallet style. I usually prefer a mallet style putter but I tried both. There is a definite difference in feel when you putt. It’s hard to describe but the weight distribution does keep the putter face square to the target line. If you have a tendency to arc your putts too much, you should definitely check out this new product. Axis1 putters are available online at their website (http://www.axis1golf.com) and now at amazon: Axis1 Golf Axis1 Eagle Putters 34.0

I tried the putter out in their booth on the trade show floor and it does what they say it will do. Check it out at their website: http://www.radiusroll.com